The Hysep® 1308 module is the largest module currently offered in the Hysep® product line and consists of a 13-tube membrane unit with a total area of ~0.5 m2. It is especially suited for to verify both TNO’s thin-film palladium membrane performance and module designs at larger hydrogen fluxes.

The hydrogen separation module can be used to extract hydrogen from any reformed fuel. This can be an effective means to deliver high quality hydrogen for industrial process gas, for hydrogen fuelling stations or for PEM fuel cells.

In order to effectively utilize the membranes the hydrogen is brought into contact with the outer surface of the palladium coated ceramic support tube. The thin palladium fi lm acts as a selective barrier, passing only atomic hydrogen through the layer, while excluding other gasses. Molecular hydrogen is adsorbed onto the surface where it is dissociated to become atomic hydrogen. The hydrogen diffuses through the layer in a direction determined by the pressure gradient. The hydrogen atom recombines on he low pressure side of the membrane with another hydrogen atom and is desorbed as a hydrogen molecule.

In addition to the separation of hydrogen, the palladium membranes can drive reactions beyond traditional equilibrium levels because the palladium acts as a catalyst. As an example, the membranes can further drive water gas shift reactions for reformats. This membrane configuration may be operated to maximize hydrogen recovery to extremely high levels (>95%).

TNO has developed the Hysep® technology to enable low cost and reliable hydrogen separation based on thin-film palladium membrane technology.

Although the support tube is a high-tech product requiring unique expertise to manufacture, it is based on low-cost ceramic tubes. In producing membranes based on these tubes only production methods are used which enable scale-up to cost-effective high-volume industrial fabrication.

Key characteristics of the membranes are the hydrogen flux, selectivity and lifetime. These will depend on the specific process, most importantly on the pressure at which the hydrogen containing mixture is available, gas composition and presence of contaminants. Lifetimes of several thousands of hours have been shown under different conditions and purities which can be reached range from 99.5% to 99.995% depending on the initial composition.

The thin palladium layer, combined with the ceramic support tubes on which the Hysep® technology is based, creates a cost-effective and reliable solution to deliver high quality hydrogen. 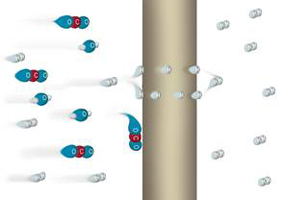